Voices of Development: A Conversation with Dr Oriana Bandiera 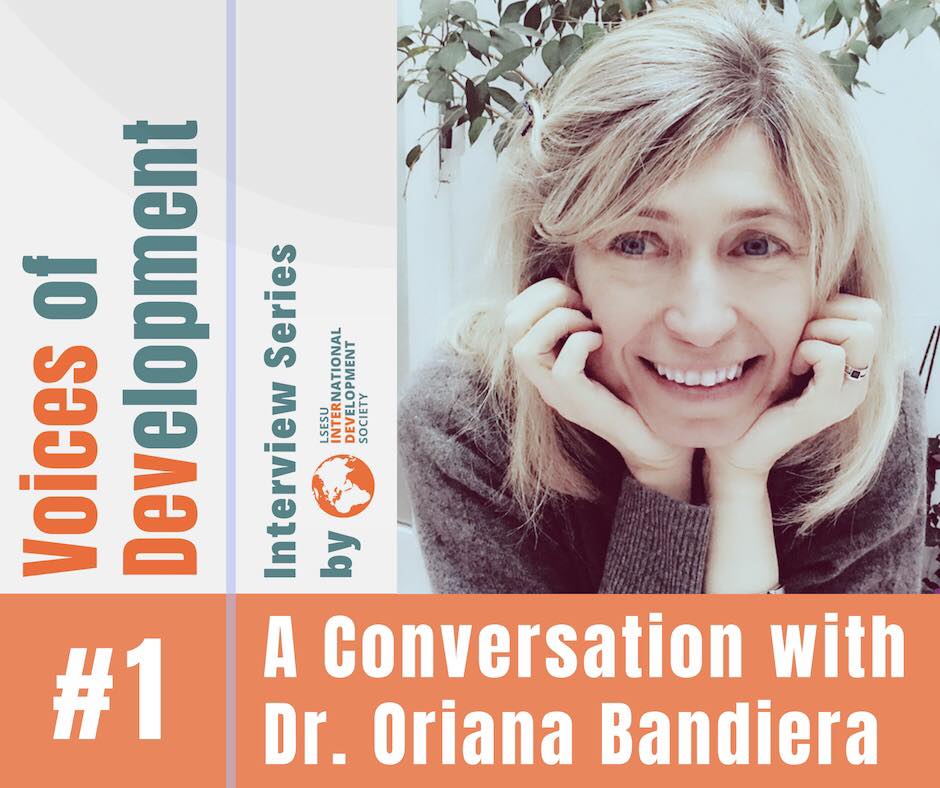 Q: When did you realise you wanted to study development economics?

I come from a very poor part of a rich country, and so for me, the question of development was always the only question that there was. Growing up in Sicily in the 1980s and comparing it to Milan, which is in the same country, the difference was enormous. I always wanted to know why that was the case.

Q: Was there an epiphanic episode when it all ‘started’?

I found that studying in Italy in the 1990s was all about macroeconomics. UntilNick Stern of the Stern Report on Climate Change – he is a colleague here – came to teach a 1-week course. At that time he was working on Palanpur. Palanpur is a village in India, where he and his co-authors have been collecting information about every household for, now, 60 years! When he told us at Bocconi – it was maybe at the third round of these surveys – that “we have been going here for 30 years” – I was so amazed that somebody’s day job was to go to a village and study the economy of the people of that village. And I thought, that is what I want to do when I grow up. And… that’s how the story goes!

Q: Tell me about your research! What is your latest project?

So just in front of me, I have this paper, which we got back from a journal for revising, and the title of this paper is “Losing pro-sociality in quest for talent: sorting, selection, and productivity in public service delivery.”

The paper provides first evidence in a debate, which is raging in the development world, which is about thetype of worker which makes the most effective contribution to health– so if you are hiring nurses, doctors, and the like. There is always this sense that if you pay them or give them any material benefits, you are going to attract people that do it for the money and not for the job itself.

So we designed a test in Zambia, where the Ministry of Health was trying to get nurses for very remote rural areas. What happens in the traditional model there is they send nurses from the centre; but the moment they get to the rural areas, they run away. In the rural areas you only have nurses that work for the NGOs and they are not trained. The government decided to hire these NGO workers, train them properly, and send them back to their own communities.

The question they asked us was – literally, the personnel director of the Ministry of Health asked us – “We are very afraid of hiring them as part of the Ministry of Health, because the moment you see advertisements on a career in Government, we are going to attract all the wrong people.”And we told them: “You know what? That’s exactly what economists would want to know.”

So we designed an experiment. We randomised the way the position was advertised in 48 districts. In 24 districts, it was advertised as a community-based position, with a poster saying you can come and help your community, this is a job to help others, etc. And that is kind of a control group. In the other 24 districts, we advertised the career very heavily as based in the ministry.

So, now when we look into the applicants, we find that the treatment – that is, the career poster – attracts more skilled and least prosocial applicants.

Prosocial. So if you measure prosociality as a way of.. how much they believe in the cause, you know? How much they care about the people they are going to work with.

If you inquire what difference that makes, we measured how much they work – they work a lot more. Two years later we did a household survey and found that malnutrition had fallen by 25% in the treatment group – and these workers are paid the same.

That tells you that the type of person you attract makes a big difference, and that there is not really a trade-off. There is a trade-off on average, that is, you can attract people with low ability or low prosociality, but nobody’s ever going to hire them! So all this fear that people have for paying health workers is actually not justified once you take into account the selection. And I think this illustrates how economics, which takes into account how people respond to incentives, matters a lot – because a lot of the intuitions that we have at first can be wrong.

Q: Some see economics as a traditionally ‘macho’ field. Is development economics different?

I think things are changing not only in development economics. For example, historically, at the LSE, men would work and women would be at home. When I joined the LSE, the seminars would start at 6 o’clock. 6 o’clock is terrible for a person, male or female, with a young family. So I just told my colleagues, ‘why don’t we do it at lunch? We all have to have lunch, so we might as well eat lunch at seminar?’ Everybody said ‘yeah, why not!’

That was the case of an institution that was clearly a leftover from the past, when there was no need to take into account the needs of a young family, and it had remained like that, and nobody had thought about that. But the moment you ask about it, nobody opposes the change. So it is very tricky to tell the difference between things which are there – for, you know, just a leftover – and actual discrimination.

Q: So sometimes, there is just an inertia from the past?

I think a lot of it is inertia. I think people should try to change things before complaining that they are unfair or intentionally discriminatory as that will uncover the real discrimination and it will make it easier to fight it.

Q: What, in your opinion, is the most important recent progress in development economics?

In fact, development economics is now one of the hardest fields from the point of view of empirical credibility. If you go to a seminar and all the audience is from development, chances are that the paper will not survive!I think it is becoming a bit too much. The problem is, the methodology determines the questions you can ask. You cannot randomise the identity of the leader. I would like to randomize Trump, but I can’t.

Q: Many people reading this interview would be interested in going into the field of development economics. What’s your most important piece of advice?

But the most important thing is that you should go work in the field. You have to see the facts with your own eyes. Sitting here, we can teach you all we know, but until you see, you can never realise. Luckily, there are many researchers in development economics who need research assistants on the field. J-PAL and IPA have a website where you can apply, with a centralised pool of applications. People hiring can check who is available. [See this page at the Poverty Action Lab].

Dr Oriana Bandiera is the Sir Anthony Atkinson Professor of Economics and the Director of the Suntory and Toyota Centre for Economics and Related Disciplines (STICERD) at the London School of Economics, and a fellow of the British Academy, the Econometric Society, CEPR, BREAD and IZA. She is director of the research programme in State Capabilities within the International Growth Centre (IGC), and of the research programme in Development Economics at CEPR. She is co-editor of Microeconomic Insights, the Journal of Labor Economics and Economica. Her research focuses on the ways in which incentives affect people’s behaviour, and how far these effects depend on social context or social relationships. Professor Bandiera was the 2011 recipient of Carlo Alberto medal, which is awarded biennially to an Italian economist under the age of 40 for outstanding research contributions to the field of economics. Website